How pediatricians are relieving the concerns of parents of kids ages five and up. 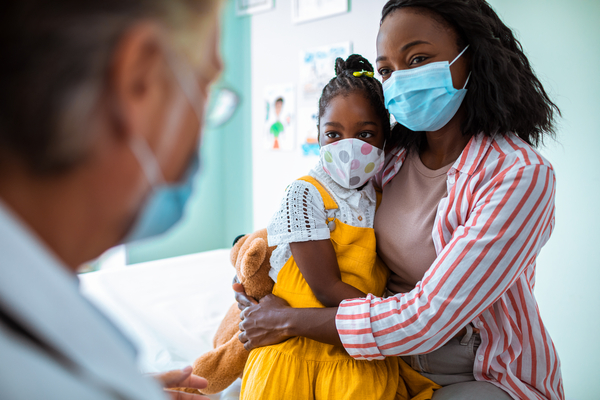 About 7.8 million children in the United States have been infected with COVID-19 since the coronavirus first began its spread in early 2020, according to December 30, 2021, data from the American Academy of Pediatrics (AAP).

While severe illness and death from COVID-19 are still uncommon among children, they can happen. Nearly 700 have died between March 2020 and December 2021, and thousands have been hospitalized. What’s more, after recovering from the initial infection, for some kids there can be long-term health consequences — also called long COVID-19 — which can mean persistent symptoms like brain fog, fatigue, headaches, dizziness, and shortness of breath.

The good news is that since November 2021, those children five years of age and older are eligible to receive a Pfizer-BioNTech COVID-19 vaccine. The dosage is about one-third the amount given to adults but follows the same protocol of two shots administered three weeks apart. The Centers for Disease Control and Prevention (CDC) also recommends that 5- to 11-year-olds who are moderately or severely immunocompromised receive an additional primary dose of vaccine 28 days after their second shot. Those 16 and up are eligible for a Pfizer-Bio-N-Tech booster six months after their initial vaccination series, the CDC says.

The reasons vary. Some children are not being inoculated because of fears and concerns their parents or guardians have about the shots. Some parents are worried about potential side effects. Others fear perceived acute and long-term implications of vaccinating their children, from concerns about the vaccines triggering myocarditis and pericarditis — inflammatory heart conditions — to worries if could cause infertility later in life.

Some parents have also expressed anxiety about whether the vaccine development process was rushed, or concerns that researchers didn’t spend enough time studying it, says Eliza Hayes Bakken, MD, a pediatrician at Doernbecher Children’s Hospital in Portland, Oregon. She says some parents are also skeptical that their kids need the vaccines at all, asking whether it wouldn’t be better for them to become immune via infection instead.

Helping these parents and guardians accept COVID-19 vaccines for their children has become a critical component of the work pediatricians do each day to protect the health and well-being of their patients. Here, several pediatricians explore how they encourage reluctant parents to vaccinate their children against COVID-19.

First, “we need to look at why people don’t want to vaccinate,” says Behnoosh Afghani, MD, division chief of pediatric hospital medicine at UC Irvine Health and a clinical professor of pediatrics at the University of California, Irvine, School of Medicine. “The reasons may be different for different groups of people and ethnicities.”

Afghani notes, for example, that some undocumented immigrants are wary of getting themselves and their children vaccinated because they are concerned about exposing themselves to immigration officials. Those who do not speak English as their primary language may shy away from seeking a vaccine because they and the vaccine provider don’t speak the same language.

Afghani says connecting with parents in their native language can significantly improve uptake of the vaccine. While group sessions or town halls that encourage vaccination can certainly provide good information and offer a sense of community, “I think talking on a one-to-one basis is more effective.”

Many families feel genuinely torn between weighing the benefits of the vaccines and the potential risks they’ve heard about. Doctors say listening empathetically and responding with facts can help assuage some of these fears.

Sonja Rasmussen, MD, professor of pediatrics and epidemiology at the University of Florida College of Medicine and College of Public Health and Health Professions in Gainesville, Florida, sees kids with genetic disorders who are at higher risk of severe illness from COVID-19 than healthy children with no underlying medical issues.

Rasmussen says that her patients “have even more reason to get the vaccine,” because the underlying health issues can worsen outcomes if the child becomes infected with COVID-19.

Still, some parents remain hesitant. “Sometimes they say ‘well my child already has all these issues. I don’t want to take any extra risks,’” she says. “And that’s when it’s really so critical to try to say, ‘Yes, I can see why you’re concerned.’”

Acknowledging those fears with empathy helps parents feel heard and allows them space to change their minds when presented with facts, says Rasmussen.

For example, often the concerns parents raise are based on misinformation, but their concern is still based in love for their child.

Talking through each point can help parents make better and more informed decisions for their child’s well-being.

“The key thing is trying to understand what they’ve heard,” Rasmussen says. “In my experience, when you take the time to hear their concerns and respond and give them the [correct] information they sometimes change their mind.”

Elizabeth Chenoweth Lloyd, MD, a pediatric infectious disease physician at the C.S. Mott Children’s Hospital in Ann Arbor, Michigan, says that while it’s important to use facts to underscore the benefits of being vaccinated, doctors should avoid sugarcoating the risks, big and small. She notes that science doesn’t have all the answers about COVID-19 and the vaccines just yet, so being honest about what’s known, what could be a problem, and what’s likely to happen helps foster trust.

“I think it’s really important for pediatricians to educate themselves and be able to discuss that and be honest about what the potential side effects of the vaccine are,” she says. “I think most parents and families appreciate that honesty,” she says.

Data is also a key tool in educating parents. Bakken uses data to help reluctant parents see in black and white how many people have been vaccinated and how few serious side effects or negative outcomes have resulted.

She encourages them to “see my perspective,” she says, “which is that the things that feel really big and scary to you about this vaccine are much less risky than the risk you’re taking in not having your child protected.”

For some time-strapped parents, the issue isn’t if their kids will get vaccinated, but how they can make that happen. To improve accessibility, Afghani recommends offering weekend or early-morning vaccine clinics and other opportunities to vaccinate children when it’s convenient for busy parents who may be working multiple jobs.

For some parents, access can mean open lines of communication. Lloyd says it’s important for the health care provider to initiate the vaccine conversation rather than relying on the parent to bring it up.

“I’ve had families who haven’t said anything about it, but we’ll end up on the topic of COVID and I’ll bring up vaccinating their child,” she says. “And it turns out they have all these questions that I don’t know whether they were scared to ask or just trying to be respectful of the limited time.”

Speak as a parent

Bakken has found that relating to a hesitant parent by sharing her own parenting decision to vaccinate her kids has helped ease some of the fear.

“I’m also a parent,” she says, “and I start off telling them that I would never recommend a vaccine for my patients that I don’t believe in for my own children and family. I’ve also had to make these choices as a parent, not just as a pediatrician.’”

As with any other decision a parent needs to make about their child’s health care, listening with compassion while guiding them to the best decision for their child works much better than just telling someone to do something. It’s important to remember, Rasmussen says, to avoid a paternalistic approach when offering any advice.

“What doesn’t work is to have the attitude of, ‘I’m the doctor and I know best, and you need to get vaccinated,’” she says.

Having multiple points of contact with a hesitant parent is also a good tactic, Rasmussen says. She spent 20 years working at the CDC researching how to encourage pregnant people to vaccinate against the flu. The same approach can be used with parents hesitant about the COVID-19 vaccines.

“What we learned is that it isn’t a one-and-done thing,” she says. “The next time they come in, ask ‘Have you given any more thought to getting vaccinated?’”

Lloyd agrees that pediatricians should take an all-hands-on deck approach to encouraging vaccination.

“Whenever there’s patient contact, I think it’s helpful to bring it up,” she says. “It’s not just the primary care pediatrician, but specialists, doctors in the emergency room, and hospitalists” who also should be talking about the vaccines with hesitant parents. “I think more providers presenting the same message is likely to be more impactful.”

While it’s certainly important to listen empathetically and help support parents as they consider their options, some doctors are highlighting the potential risks of not vaccinating against COVID-19. Paul Offit, MD, director of the Vaccine Education Center and an attending physician in the division of infectious diseases at Children’s Hospital of Philadelphia (CHOP), describes COVID-19 as “a disease of the willfully unvaccinated at this point,” noting that virtually all of the children admitted to CHOP with severe COVID-19 have been unvaccinated.

To stem the tide of ill children seeking intensive care, Offit encourages primary care pediatricians to “make it clear that the choice not to get a vaccine is not a risk-free choice,” he says. “It’s a choice to take a different and more serious risk” than accepting the vaccine.

He adds, “people see their children as more vulnerable. They’re worried that they would do something that would hurt their child” if they accept the vaccine. “What they don’t realize is that not vaccinating their child is the thing that would most likely hurt them.”

He adds that slow acceptance of the vaccines creates safe havens for the virus to mutate and become even more dangerous and infectious, as is currently happening with the omicron variant. “This virus is perfectly willing to reproduce itself in unvaccinated children and cause harm,” Offit says. While there are still some unknowns regarding the durability of protection offered by the vaccines in response to new strains of the virus such as omicron, early indications are that it offers some protection. And some protection is always better than none.

Topic:
Article
Why We Can’t Succumb to Pandemic Fatigue

Mask mandates have dropped and vaccines are widely available, but COVID-19 remains a dangerous virus.

Poor kidney function can lead to severe disease, which is why some patients and providers have been strong advocates for vaccination.